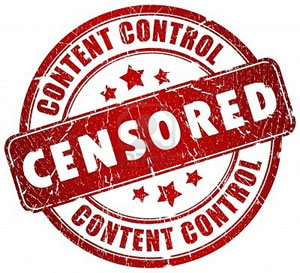 One of the largest internet credit card processors in the world has recently announced a policy of zero tolerance regarding the use of certain words on sites it represents. How long will it be before all the others follow?
“Gazing out over the verdant fields of rape, my soul abducted by the strains of scat jazz as they drifted hypnotically through the evening air, I could not help but feel....”

There is a war taking place on the internet, and I bet you haven’t even noticed.

It’s not a conflict that will affect many of you. Yet. You know how things work these days, though; you give someone an inch, be they lawmakers, politicians, or just big business mavens, and soon they’ll be taking a mile. There’s not a thing any of us can do to stop them, either.

As regular readers will be aware, I write erotica. Nothing too harsh, nothing too extreme; just good old fashioned girl-meets-boy-and-fucks-him smut. No rape, no incest, no toilet games... nothing nasty at all. In fact, the sentence that opens this article could easily have been drawn from one of my tales. However, if I were to publish it on any one of several erotically themed websites, this is how it would be forcibly rendered:

“Gazing out over the verdant fields of censored, my soul censored by the strains of censoredjazz as they drifted censored through the evening air, I could not help but feel....”

Credit card processors (IPSPs, or Internet Payment Service Providers) are the lifeblood of the internet. It is they who collect your money when you make a purchase; they who facilitate your subscriptions to pay sites. They're the ones who ensure your financial security whenever you make a payment of any kind.

They are now in such a position of power that they are arbitrarily censoring the content of the websites that rely upon them to sustain the business in the first place.

With minimal editing, this is an e-mail I received today from the webmaster of one of the sites I contribute to:

This concerns your story called "Welcome To Spain"

I'm afraid your story is affected by this.

In the actual text of your story: Found 1 occurrence(s) of the word hypnotic

To prevent trouble with censored, your story has been adapted. This means the offending words have been replaced with the text [censored]. I am very sorry about this, but I'm afraid I have no reasonable alternative but to comply with the credit card processor's demands.”

Like I said, this probably doesn’t affect you. Or, if it does, maybe you will shrug and say “okay, I’ll just use another word.” However, that’s not really what it’s about, is it? The four words highlighted in my sentence (and the one that proved so offensive in my story) are words that, in the context used, could not offend anybody. “Rape” and “scat” have negative connotations if you wish to see them in that light. However, what if you represent an agricultural organization or cookery website, and wish to highlight your use of rape seed oil? Or what if your site represents a women’s shelter, or even a news site? What if you’re a jazz critic discussing a very specific style of singing? What if you are musician Scatman John, or actor Scatman Crothers? What if you are a psychiatrist offering hypnosis therapy, or a UFO buff discussing alien abduction?

I’ll tell you what -- you’re screwed.

A decade or so ago, when word filtering was still a new toy for internet providers to play with, America Online made major headlines around the world when they outlawed the use of the word “cunt” (among many others). This was great until the local government in the English town of Scunthorpe found their e-mails being routinely blocked by the filters. Filters, presumably, became smarter thereafter, or at least somebody found a way to prevent similar errors from being perpetuated. Common sense spoke out.

Right now, we have to hope that similar lightning will strike again, and that common sense will prevail once more.

Because it’s not the language that is under assault; it’s not erotica, it’s not one person’s right to write smut and call it art. It is free speech. It is creativity. It is the First Amendment, for heaven’s sake. The Supreme Court could not dislodge an author’s right to write, neither could the government, the FBI, or any other legal body in the land. A lot of people fought, were imprisoned and even died to preserve the right of free expression. Perhaps we were naive, but a lot of us thought they had won the war.

Think again. A private company, one of the largest IPSPs on the entire internet, with offices and representation throughout the United States and Europe, has stepped in where politics, religion, and all the other forces of censorship could not, and snatched away that right regardless.

I do not use the IPSP I’m referring to here. So, for the moment, we can continue writing about mesmeric jazz vocalists who steal our souls. We can discuss our favorite 1994 episode of Dr Quinn, Medicine Woman, and our favorite song from Fleetwood Mac’s Mystery To Me CD. We can even post photographs of those beautiful fields of bright yellow that adorn the French countryside between Paris and the Loire.

However, a lot of websites cannot, because someone, somewhere, has declared that the use of certain words to be prohibited. These words are not, incidentally, posted on the company’s website, so you can’t even watch what you say ahead of time. Verboten. "Interdite." Or, as George Orwell would have put it in 1984, they are now "unwords." Forget about Big Brother; it looks like Big Business is who we really need to watch out for.


POSTSCRIPT
Since writing the original article, I've received a more complete list of "banned" words. Again, you will notice that no actual vulgarities are included, but there's a lot of very innocent terms whose sexual connotations, while conceivably negative, are almost extraordinarily minimal. Okay, deep breath (you'll need it)...

other terms... necrophilia, pedophilia (and associations - underage, pre-teen etc), zoophilia... fall into illegal territory, so their presence on the list could be considered understandable. At the same time as they brightly highlight another iniquity of this regime, the absolute absence of any human agency in actually checking the context of these words' usage. If you are going to police the Internet, then police it properly.

Right now, the companies employing this system are essentially practicing the linguistic equivalent of racial profiling... the assumption that all uses of a given word are illegal, just because a small handful of them might be.

And it's only going to get worse.

Posted by Jenny Swallows at 4:49 PM

Why won't you name the company, please?