Curl up for the holidays with the Nympho Librarian

Eleven seething tales of scalding raunch set in that most sacred of sexual sanctuaries - the public library. After hours, off the cuff, behind the bookshelves or under the desk, The Nympho Librarian and Other Stories is the book that defies the Dewey Decimal System. It ought to be filed under Red Hot Erotica. But you'll keep it under 69. 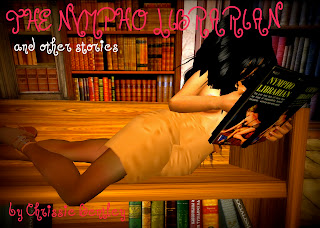 I was a slow starter in the sex stakes.  I realized very early on that a name like mine was worth its weight in gold when it came to attracting boys’ attention… that it was the nomenclatural equivalent of a pair of big tits.  But I also knew that I wasn’t interested in boys.  I wanted men and, quite frankly, I didn’t have a clue about how to get one.  I certainly wasn’t going to start walking up to strangers and introducing myself, although, in my fantasies, I did it all the time – “hi,” I’d say.  “I’m Jenny Swallows, and I do.”  And I was fairly certain that I would.  Swallow, that is.  But I didn’t know for sure because I’d never had the chance.

So, I decided to become a hooker.

Looking back, I hadn’t really thought it through.  How much would I charge?  How would I find clients?  And how would I weed out the icky guys, so that all my clients were the same handsome studs that gyrated through my imaginings?  I didn’t know, so I didn’t worry about it.  All that mattered to me was what happened once all that was taken care of…. And it went something like this.

He was usually tall, blonde and occasionally English.  A businessman in town for a few days, and he’d got my name from a friend.  We’d meet in the lobby of his hotel, a swish joint in Abilene, and he’d wine and dine me at the best restaurant in town.  Then a cab back to the hotel, an elevator up to his suite, and that’s where it would start, with me dropping to my knees before him, and resting my cheek against the erection that our earlier conversation… as I outlined everything he would get for his money… would have set in motion.

“Well, where?” I’d reply, as I licked his shaft from balls to bell end, then ran my tongue around the crest.

“We’re almost at my floor.”

“I’m almost at the top,” I’d say, and I’d give his helmet a long, deep kiss.  But he was right, we were almost at his floor, so I’d zip him back up and then patiently wait while he found his door key and let us into his suite.  Candlelit, with champagne already on ice – you see, I told you I hadn’t thought any of this through properly.  But it was my dream, so there it was, champagne and candles and a pair of pants that vanished the moment we got into the bedroom, and now there was nothing to stop me.

I push him back on the bed, his legs hanging over the edge for me to kneel between, my elbows resting on his thighs as his cock rises unaided towards me.  I clutch it with two fingers, gently move it towards my mouth, and then I begin to suck.

And suck and suck and suck, until he is so close to coming that his entire body is in ecstatic spasm.  Then I pause and wait for the moment to pass, allow him to gain control once again.  And then I start once more.

I rarely wore a wrist watch, and there was no clock that I could see.  So I don’t know how long it lasts for.  But whatever he paid me, he’d get a minute for each dollar, and believe me, I wasn’t cheap.  A two hour blowjob?  Three hours?  Four?  I didn’t mind, and neither would he and when, at the end, I finally did let him come, it was like placing my mouth over the end of a hosepipe and then turning the water faucet on full.  Except it wouldn’t be water, it was honey and liquor and candy and joy, and every drop tasted better than the one before.

And he’s paying me?  Unbelievable!

I’d stay the night, or what was left of it regardless, and maybe we’d fuck or he’d eat me or whatever.  But I’d have got what I came for, and the rest was just a bonus.  Fuck, the cash was just a bonus.  But I’d never heard of hookers who gave it out for free, so I didn’t let it bother me.  Plus, it was better than working.