Intimacy - You Can't Fake It 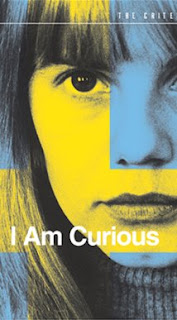 Bombarded by imagery of sex and death, politics and disaster, life - like the movies - sometimes feels like it's lost all grip on what matters. Some ruminations on the meaning of intimacy, seen through the lens of a forty-five year old subtitled Swedish movie.

It always surprises people when the conversation turns to pornography and I tell them that the first blowjob I ever saw on screen was in film class. Director Vilgot Sjöman’s I Am Curious Yellow was the fare of the day, a late sixties Swedish movie whose reputation, sadly, precedes it wherever it is mentioned. Because of the fuss surrounding its content, because of the controversy that greeted its US release, and because of the bans that so many communities bound it with, anybody today who has heard of it usually shrugs it aside as a dirty film. Well, it is Swedish.

In fact, it is a political movie more than a sexual one. Its motives and messages being bound up in that same ferment of student unrest and discontent that flavored so many movies of the age, from Godard’s Sympathy for the Devil to Easy Rider and beyond.

Yet there it is. A sex scene that is clearly not your usual “put on the body stocking and think of cold custard," and following the conclusion of the main course, heroine Lena Nyman leans into her love and plants a kiss on his flaccid penis.

That’s it. A kiss. No penetration, no devouring. The moment is over in a moment. Yet every guy in the class was howling for the movie to be paused and wound back a few seconds, and I suspect that half the girls in the class felt the same way silently. And whatever the stated purpose of the class may have been (it was indeed something political) was immediately subverted to a more fascinating discussion on the role of reality in the cinematic experience, which was the professor’s intention all along, albeit one that must have been (and I would guess still is) extraordinarily difficult to frame.

Reality in the movies is, after all, subjective. No matter how much ketchup and prosthetics, special effects and effective screams might be lavished on a scene, still we know that all the dead bodies got up and walked off the moment the director cried “cut.” There was, in the mid-1970s, a media panic concerning the supposed existence of genuine snuff films making it onto the underground circuit, but nobody was ever able to conclusively prove one, and the fuss died down in the end. A situation with which few people would disagree, one hopes.

Love scenes, too, are difficult, at least if the director wants to remain within the realms of anything approaching the mainstream, and that has always been one of the underlying reasons why we even have a XXX industry today. There is a line that does get pushed every time Hollywood squeezes another glimpse of naked body past the censor (and it is not that long ago that full frontal male nudity was strictly prohibited), but we still have a long way to go before erect cocks and gaping pussies will be flashing across the Multiplex screen. Again, a situation with which few people would disagree.

The fact is, though, it is an industry that is built upon blurring the distinctions between fantasy and reality, which is deemed to have failed miserably if we are not, at least for the length of the movie, convinced that a monster icequake has just unleashed a horde of vampire spiders onto a sleepy city, believability is crucial.

Watching Lena (the character shared her first name with the actress) make love with her married boyfriend Börje, the viewer does not even consider the possibility that the action is “real.” Nothing suggests it, the camera does not gloat. It is the kiss, and only the kiss, that lifts the scene out of the mundane and into the memorable. And even today, with all this and more just a mouse click away, that scene still possesses the capacity to surprise, or even shock. Not because of what it is, but because of what it depicts.

But what we cannot see - or, if we can, it is overwhelmed by everything else that is happening - a single, simple moment of genuine spontaneity, mindless of lights and cameras and action. And it doesn’t even matter if the scene had been scripted, and Lena’s action was as calculated as any of the movie’s other set pieces. The fact is, Sjöman’s camera caught a moment that today still stands as one of the most nakedly honest ever framed on a cinema screen, and it is that which the viewer still reacts to.

And in as much as it did cause such a fuss (it was banned in Massachusetts, while a Texas movie house was burned to the ground in protest at it screening the film), it might well be considered one of the building blocks upon which the modern industry, or at least our acceptance of it, is built.

Which seems a peculiar fate for a movie whose greatest crime, then and now, was not to show a forbidden act, but to depict a sensation that we all crave. Intimacy itself has been devalued in modern culture, the word slipping so far from its actual meaning that celebrities now deliberately pose for “intimate” photographs, and songwriters spill their putative guts to convince us how much they mean what they sing.

But line any of them up with those few seconds of celluloid, and then decide for yourself who is telling the truth. And tonight, when you settle down with your partner, ask yourself again which moment means the most.

The one where you repeat the same pattern, the same words and actions, that have always constituted love-making as long as you’ve been together?

Or the one where you just leaned over and...whatever...simply because you felt like it?

I know which one I’d choose.
Posted by Jenny Swallows at 5:28 AM