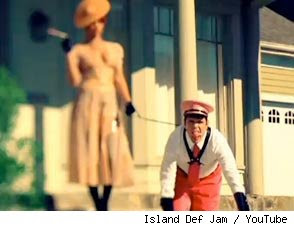 Banned, apparently, in eleven different countries... flagged by Youtube, edited by MTV, censored by most everyone else... the new Rihanna video is called "S&M" and... well, the next time you're having one of those discussions about how "the vanilla world doesn't understand us," think on this....

But just to help put things in perspective, here's Frankie Goes To Hollywood from 1984.... This one didn't get banned, apparently.
Posted by Jenny Swallows at 5:37 AM