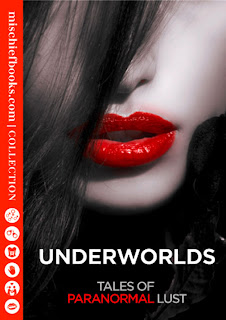 Ten brand new paranormal erotica stories featuring vampires, werewolves and shape shifters. Stories written for those special nights when this world and all it offers is not going to be enough.

Includes my story RIDING THE GHOST TRAIN
I awoke with a start.  Was that laughter I heard?  It took me a moment to remember where I was, to connect the hard metallic ridges beneath me with the barely carpeted floor in the back of Ryan’s van, and the absolute stygian darkness with the fact that we were parked in a clearing in the middle of the park.   Lying on his side beside me, Ryan’s slow, rhythmic breathing let me know that whatever I’d heard had not awakened him, although the thick weight that pressed against my thigh told me that not all of his faculties were sleeping.


I shifted myself slightly, to mould my buttocks around the bulge – we were both fully clothed, but the night had grown chilly enough that we’d happily draped the comforter over us as we sat talking, listening, waiting.  Then, though neither of us had any intention of actually doing so, we must have fallen asleep.


Sleep was out of the question now, though.  Yes, that was laughter.  And faint behind it, voices, cheery and excited.  Snatches of music, too, and underpinning them, the low hum of machinery.  I wondered what I’d see if I sat up and wiped the condensation off the back windows.  The pitch black of Whiskeyport Springs Park, one summer night in 2011?   Or a scene from one of the sepia photographs that hung in frames around Ryan’s office wall, preserving this place as it was a century ago?


I closed my eyes and nestled closer to Ryan; he stirred slightly and an arm looped around me, the side of his wrist just grazing my breast.  I wriggled to try and make firmer contact – we weren’t dating, we weren’t lovers, we hadn’t even kissed.  But if I’d ever needed to feel another human being close alongside me, now was that moment.

Posted by Jenny Swallows at 8:18 AM