Isn't That You On The Screen? 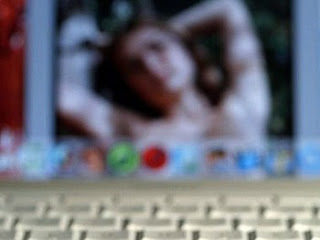 You can find anything on the Internet. Including, apparently, footage of your friends having sex.

It was an e-mail from my friend Margie that started me thinking. “Doesn’t this look like Sheila?” she wrote amid a sea of the most evil smileys she could find, and when I clicked on the link, I had to admit... yes it does. But not doing anything I’d ever seen her do before. Or, I imagine, anything she’d want to know I’d seen her do.

I’m guessing that most of us, whatever age we may be, have thought at some point of taking a few pictures. Maybe we’ve fantasized about movie cameras too. And maybe, just maybe, we’ve acted on those impulses and, tucked away in a drawer some place, there’s some Polaroid snaps... or a roll of undeveloped film... of our younger self doing, wearing, or posing in a fashion that definitely won’t be appearing in the family album.

In the old days, pre-Internet, that was as far as it went. And today, for many people, it remains that way. Yes, they’ll maybe admit under threat of dire torture that there’s a memory stick somewhere, and an “ex- and I” frozen forever in a sequence of blurry, under-lit hot shots. But no, you can’t see it and I may have thrown it out already.

But watching Sheila’s “movie,” and then exploring the rest of the site upon which her three minutes (and forty-three seconds) were posted, I suddenly started wondering. How many people are actually up on this site? And all the hundreds of other sites like it?

We’ll excise the pro-shot movie clips from consideration, and the dubious “reality” of the gonzo brigade. Yes, perhaps there are a couple of guys who tour the country with hard cock and camera, convincing total strangers to bare all for fun. But they’ve never slowed down beside my bus stop, and their cast always seems too casual for this to be anything but a set-up.

No, we’ll concentrate only on the obvious amateurs, the shaky cameras and muffled sound, the TV too loud in the background and the dog barking out in the yard. To the girl who looks at the camera cautiously even as she tries to muster the right sultry glance, and the guy who can barely point the camera straight, and holds his breath throughout the whole thing, for fear of breaking her concentration.

I bookmarked three sites that upload new films daily, and over the course of the last seven days, I counted no less than eighty three clips that meet those criteria. Some were better shot than others, a couple suggested that the makers were already au fait with the demands of the home-made porn movie. But still; eighty-three couples equals 166 people. Across three sites in one week. Let’s say there are seven further sites that I didn’t check, but maintain a similar ratio. That’s 1,660 people a week and 86,320 a year. And that’s a conservative estimate. Add in the weeks with heavier traffic and a few smaller sites. Then round up to the nearest whole number and suddenly you are looking at 100,000 people a year who not only film themselves having sex, they then post it online for the rest of us to watch.

Excuse me while my mind boggles.

Take those risks and multiply them by the sheer popularity, and ease of access, of the various Tube sites. Multiply them, too, by the fact that sociologists reckon we have far greater circles of acquaintances today than we ever had in the past. True, my 100,000 figure is worldwide, but still. Each of those 100,000 has friends... family... co-workers... any and all of them could be surfing one day, and pause to watch “fucking my gf while we listen to Adele.” And stare in disbelief because - well, as Margie put it, “doesn’t this look like Sheila?”

I’m not condemning here. I’m not even questioning. It’s just an observation. We think we know the people we know, and we’re all largely certain that they could never shock or surprise us. I’ve been writing erotica for a decade now, and most of my friends are well aware of it. But Sheila? To the best of my knowledge she has never more than glanced at one of my stories, and her idea of a good time is the Wednesday night crocheting club.

A very accomplished one too, if that clip is to be believed. Certainly she’s better at on-camera sex than she is at denying it was her, but I wasn’t going to argue with her because her denials, in a strange way, actually answered the question I most wanted to ask her.  What will you say if anyone asks?

Multiply her response by 100,000 as well. That’s an awful lot of body doubles! I just hope mine keeps her clothes on.
Posted by Jenny Swallows at 3:30 AM