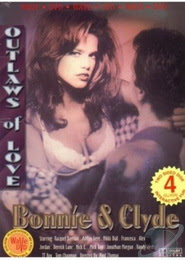 So where have you been hiding, you little beauty?

If there was any justice in this world, Bonnie and Clyde: Outlaws Of Love would be hanging around the upper echelons of everyone’s Top-Whatever XXX movies, a reminder not only of the days when adult movies were toying with mainstream sensibilities (which actually ended almost twenty years before this film was made... but you get the picture); but also of the rare occasions when they succeeded in their aspirations. Instead, Paul Thomas’ most ambitious production since Sinderella hangs around the under-$10 bins at Excalibur and elsewhere, a buck ninety-nine for a movie that isn’t simply well-paced and well-shot. It’s also shit-hot super-heated with a cast that clatters through the hoary old legend with a passion for poontang (as Clyde Barrow would put it) that leaves even the familiar fable at the starting post.

The casting is spot on. Randy West is a classy Clyde, Ashlyn Gere a believable Bonnie. Other characters, the family, friends and Feds who pursue them, are painted with at least enough depth to make you care about what they’re doing here, and that includes Thelma (the late Alex Jordan), the blonde of dubious repute who Clyde convinces (with a crate of kneehigh) to seduce a couple of cops (Jonathan Morgan, Tom Chapman) who seem to be hot on the trail. It’s a small role but an important one, and she gets a good spitting as a bonus. Plus a scorching slo-mo blo-jo scene that would put the most devoted cop off his stride.

Several of the sex scenes have apparently been trimmed down from the original VHS release which, as the review on fapzap.com reminds us, is a shame. Yes, there should “be a law against shortening any scene with Racquel Darrien in it?” But that really only affects the movie if you happen to have the VHS release already burned into your memory banks. Great period costuming, sharp dialog and accents and a keen eye for props (Bonnie’s cigarette holder is a joy to behold) are the elements that stand out in the movie, and the hardcore is imaginative without being absurd.

There’s a human angle, too. With the bandits hooking up and hiding out with roadside pump owner Zeke (Derrick Lane) and his wife Sissy (Racquel Darrien), we know Bonnie will sooner rather than later. But the bonding and seduction last as long as the sex, and there’s a grace and bearing to that as well, a lifelike lust that conjures the reality of passion, as opposed to the mechanical mating that we’ve all grown so adept at fast forwarding through in modern movies.

Sissy sucks cock like it’s going out of fashion, but she doesn’t need to grandstand cos she already knows how good she looks; and Bonnie has to rate among the most predatory fucks that any skinflick could hope to unearth. Even on her knees being doggied till her legs give way, her expression says she’s on top, and blowing her boy toy out in bubbles.

Oh, and a soundtrack that rifles through a veritable library of orchestral classics raises a smile as well. Dispensing with a lot of the jazz-lite junk that disfigured the old VHS release, the DVD hooks into something classier - and Beethoven’s Ninth gets its greatest work-put since the days of Clockwork Orange.

Enough, too, is left unsaid that its clear that the director and writer want the viewer to actually think about events, as opposed to tolerating the plot as they wait for the next round of raunchiness; news of the capture of the rest of the Barrow gang is delivered by radio and just a few moments of footage, and Clyde’s response played out with as much irrational passion as it ought to be. And even better, the movie has a happy ending... despite an finale that suggest the outlaw duo’s ultimate demise was down to them hanging out with Zeke and Sissy for one final round of wife swapping, rather than hitting the road while they had the chance. 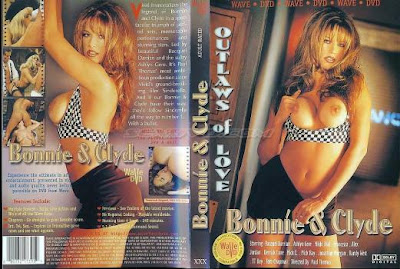 Posted by Jenny Swallows at 3:29 AM