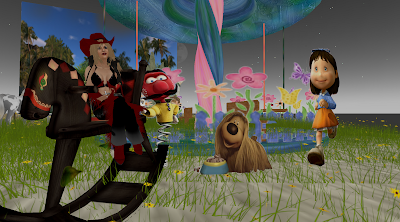 Win my undying admiration and, in 250 words or less, tell the world what you think could be going on here. A cowgirl smoking on a rocking horse, a stripey pink pole, and the cast of French TV's Le Manège enchanté... Zebulon, Pollux and Margote. And remember, s'il vous plait... Zebulon has a spring. BOING.....

All entries in the comments box, please....
Posted by Jenny Swallows at 6:03 PM

Well, since you said 250 words or less, I'll go with the minimalist approach...

By the time Margote reached the others, it was already too late.

“Well, this here sure can't the worst spot I've ended up in,” drawled Nancy, taking a drag on her cigarette. The rocking horse she was sat on creaked softly, as if in agreement. But where is here?
--
“A new arrival?!” barked Pollux, a flutter of anticipation stirring his usually jaded spirit.
“Now, remember when you first arrived. You will play nice, won’t you?” Margote gently chided him.
“Hey, come on you two. Let’s go and greet our visitor,” Zébulon bounced on excitedly. BOING!
--
Nancy saw three distant outlines approaching from the direction of a large pink pole – it was not the kind of large pink pole she could do with right now. She scolded herself: what a thing to think of at a time like this. “Hel-” she called out, but the greeting stuck in her throat as she started to make out the three figures: a young girl, a dog, and what the hell is that thing?
--
“You are welcome here. I’m Margote,” the girl introduced herself.
“Uh, thanks, but where exactly is here?” asked Nancy. The little girl’s brow furrowed as she replied,
“That’s a bit difficult to explain...”
“It’s not at all,” growled Pollux, “You can think of this as the Hotel California.” With that, Nancy began to understand, but she wondered, what had these characters done to end up here?
--
“Time for bed,” said Zébulon, and Nancy licked her lips thoughtfully.