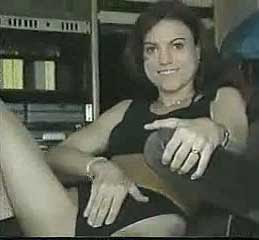 Anybody who enjoyed a certain posting last month might be interested in this follow-up to it that I found over at the Vintage Erotica Forums, in a category titled "Disgraced Minor Female Celebs"....

"Note: it has been pointed out that a Ms Williams who was a beauty queen and whom has also been linked incorrectly with the picture strongly denies that its her on the video ......" As this story makes clear. This other Alison Williams entirely, the beauty queen who looked nothing like the girl in the film, somehow became confused in the popular imagination with her naughty namesake... so she sued. As you can also read in this one. And, apparently (and deservedly), she won. To the tune of $7.2 million.

But what about the beauty who actually did make the movie?

The one who is discussed (and named) here? And here.

Well, I'm not the only person to wonder what happened to her.... ?

And the answer is... nobody knows.

Which is a shame because I'd watch her religiously if she read the news round here....
Posted by Jenny Swallows at 3:33 AM

Been curious as to what happened to her for years now, From what I can gather from reading all sorts of forums and people who are from the Norfolk area, she left to go work for her father who is said to be some BIG Wig at a pharmaceutical company ? But who the hell knows, it really is a mystery , this chick just vanished into thin air