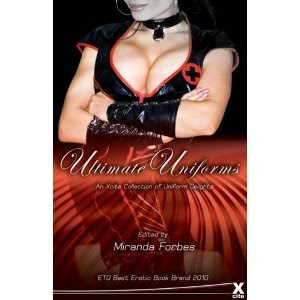 includes LOVE ON THE BATTLEFIELD by Chrissie Bentley

Product Description
If a commanding man or imperious woman dressed in a smart uniform makes your heart tick faster, these 20 original stories exploring the sensual delights of uniforms, both for the wearer and the admirer, are guaranteed to seize your attention. Whether it is the smartness and authority of military dress, the sassy temptations of a naughty maid, or the possibilities offered by a policewoman, arousing descriptions and unabashed accounts of kinky sexual encounters await!

He spoke again. “I was just wondering; how much blood am I actually meant to be losing here?”

I looked down. The bottle was half empty. “Oh, just a couple of pints for now, but it’ll keep coming. You’ll probably be dead by the end of the day.” I paused as my eyes travelled down his body. “Although, I’m wondering if your wound is the only thing that’s draining it?”

I saw his eyes follow mine, and his face turned as scarlet as the blood. Straining against the fabric of his red-stained longjohns, a fat, one-eyed helmet peeking over the edge of the cotton waistband, he was nursing the biggest hard-on I’d seen in years – and certainly the biggest that I’d never even noticed.

He spluttered an apology, but I put my fingers to his lips. “Don’t try to speak. You’re dangerously weak and any unnecessary exertion could easily finish you off.” I lay the palm of my hand an inch or so over the bulge, could feel the heat radiating out of it. “Massive blood loss. Dangerously overheated. I have to try and find a way of staunching the flow.”

Gently, I pulled his underpants away, and his cock leaped to attention, as fat as that first glimpse had promised, and – as my friend Lisa sometimes liked to say, “long enough to tickle your tonsils.” I looked around – the tent was still empty, and the only voices in earshot sounded some way away. “Everyone’s off with the fighting. This tent’s more for show,” I mused. “All the other casualties will be down there, with Dr Ronstadt.”

“Lucky for me,” he smiled, and I grinned back. “Lucky for me, as well.” I stroked his cock, and squeezed as it twitched in response. “Civil War medicine is usually so boring.”

He reached a hand up to touch my breasts, but I stepped to one side, just out of reach. “Maybe when you’re feeling better.” Squeeze.

Squeeze… and the faintest bubble of moisture appeared from the slit at the tip. Release; and I pressed my thumb against the droplet, smeared it roughly over his helmet. I glanced over and saw his eyes fixed on mine, their expectant glitter begging me to lean forward, to take him in my mouth. I wanted to as well, but I resisted the temptation. For now. Rather, I watched him watching me, then heard him moan slightly as my hand jerked up suddenly, milking the pre-cum from deep within.

Then, with the end of his cock now glistening with moisture, I leaned forward, to blow gently onto the crest. He gasped, and I looked across at him. He really did have beautiful eyes.

“I need to be inside you. I want to feel myself inside you… inside your mouth.”
Posted by Jenny Swallows at 3:55 AM