The Nympho Librarian and Other Stories

Eleven scalding tales of lust and love in the halls of public learning - the town library!

The sex is hot, but the librarians are hotter, as authors Chrissie Bentley and Jenny Swallows reveal the lip-smacking truth about what goes on behind (and on top of, and around as well) the bookshelves.

Firm fingers pulled my pussy apart although it needed very little encouragement. I was wet even before his tongue lapped the pink, could feel the panties he’d dragged down sopping against my stockinged foot, and the tight fawn skirt bunched against my back and that, too, felt moist. Ridiculously, I hoped it had not stained, then feeling ridiculous, I stifled a cry out as his tongue pushed inside my folds.

He twirled it around, then looked up at me. “You like that.” It was a statement, not a question, and my hand fell to the back of his head, gentle pressure the only answer he needed. But he resisted and his eyes flashed in the harsh fluorescents that buzzed above us.

I was standing on one foot, the other braced against a bookshelf, my foot inching a far volume backwards. 891.7 - Russian literature. Not a section of the library that received many visitors, especially this close to Christmas, but the occasional voice from the far end of the room reminded me that we were not yet closed for business, and here I was with a stranger on his knees and his mouth... his mouth... he licked again and I bit my lip to keep from moaning, which was not the response he expected. Because now his tongue was flat against me as his fingers pulled me wider, long sweeps that stopped short just a wriggle from my clitoris, so that’s what I did. I wriggled a little but he was faster, rocking back on his heels and blowing instead, a sharp rush of warm air that collided with my liquid lust, and I turned my head to bite the arm that clung for support to the top of the shelf. 817 - American literature, satire and humor.

One finger inside me, then two and his mouth again, circling my clit, teasing it, teasing me. He broke again. “I like your hair like that.” It hung loose below my shoulders. “It makes you look abandoned.”

Abandoned. I could only imagine what else I looked like, my glasses pushed up to my forehead so they wouldn’t bump his face when we kissed, my blouse half unbuttoned and one bra cup twisted down and around, when his fingers grazed my nipples and his teeth bit sharp around them. My skirt round my waist, my panties on the ground and a guy two-thirds my age, with two-thirds of his hand sunk deep inside me, licking out the fantasy that he’d texted me this morning. 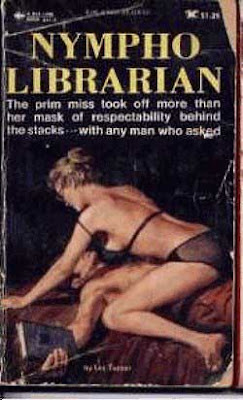 Posted by Jenny Swallows at 3:19 AM