A Night at the Ace 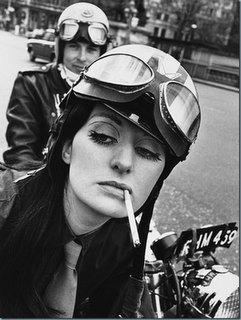 It’s one for the money.... The music was loud but the room was even louder, two hundred voices raised to make themselves heard and setting up a wall of sound that was almost physical, buffeting you the moment you squeezed through the front door. The air was thick too, with cigarette smoke and sweat, but something else too, the smell of the beach that was in everyone’s clothes, sea air and seagulls, cheap deck chairs and ice cream, pumped up adrenalin and the tang of spilled blood.

“Held him down and smashed his fucking face in.”

“Cracked him round the head with a piece of fucking driftwood.”

“He looked like he’d gone twenty rounds with Cassius Clay.” 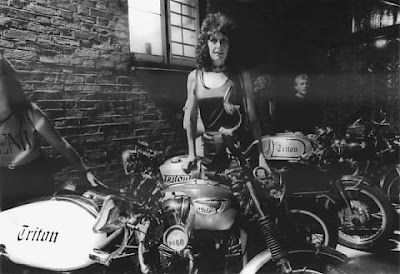 We’d been back from Brighton for less than an hour and already the legends were beginning to grow. By tomorrow, a handful of parka-clad pansies with bright bloodied noses would have become a slaughter of Somme-like proportions. But we bathed in our triumph regardless, and the victory party was just getting started.

Come on little baby, let's move it and a-groove it.... Vintage Cliff on the jukebox, and the first girls had already wriggled out of their shirts, to dance giggling and topless beneath unzipped leather jackets. A few guys followed suit and my hand brushed tight stomachs as I pushed through the crowd, to be brushed back by hands that did not know who I was, but didn’t especially care. My eyes were caught by liquid brown, the guy we called Buddy because that’s all he ever played, and he laughed as he lifted me up off my feet, till I popped like a cork above the heads of the crowd.

Laughing back, I wrapped my arms round his neck, my fingernails digging the hot flesh of his back, and he twirled me round a couple of times before depositing me back on the ground. I clung to him still and his hands cupped my breasts, still covered by the shirt that I’d slept in last night. I broke my own grip and pulled the fabric up; my nipples grazed his palms and he squeezed as he kissed me, his tongue driving in like his bike through that cafe, sending seniors screaming and flying out the door, but my tongue fought back, coiling round his as I pulled his head down to my height.

If you knew Peggy Sue.... My body fell back against whoever stood behind me, and other hands cradled me as Buddy pressed against me, kneading my ass through my tired, dirty Levis. I broke the kiss to breathe and Buddy bit my neck... the bastard, how did he know to do that then? My legs liquified and I scrabbled for balance, my hand hooked the buckle of his BSA belt and I tugged just enough to squeeze fingers inside.

Now it was his turn to groan as my nail grazed hot flesh, and I felt him suck his stomach in to give me more room to maneuver, fishing around inside his tight pants, seizing his cock as it hung halfway hard, and drawing it up to point at the sky. Then I flattened my palm and started to rub, feeling him swelling and growing beneath me. I matched my rhythm to the pounding of the jukebox... be-bop-a-lula, up down faster, my wrist against the helmet that spread against my pulsebeat, my middle finger at his balls, feeling great and fiery as Jerry Lee roared out. Goodness gracious....

Buddy bit my ear and I bit him back, clinging to the flesh of his neck, tattooing a lovebite into his throat and he pinched my nipples in response, as those other hands strayed between my legs to my cunt and started to rub through the seam of my jeans. I thought of the surf that crashed on the beach, and it felt like those same tides were flooding my crotch. Without thinking I ground my hips hard against those fingers and knowing that no-one would be letting me fall, I chanced reaching out with my other, free hand, returning the favor against coarse denim and fly.

My hands moved in unison, my cunt grinding greedy, sucking Buddy’s tongue till I thought my jaw was breaking, then turning as other lips fell on my face, and licking the skin that brushed unshaven against my cheek. Then a cry and a splash of thick burning wet as Buddy’s legs buckled and he came against my hand, his cum splashing up to the sleeve of my leather, and I pulled my arm out from the grip of his pants, smearing his orgasm across his bare stomach, then raising my hand to my mouth for a taste of what remained... the taste that sent me hurtling over the edge, and as I came the guy behind me seemed to melt into my grip and I was squeezing sodden denim over a pumping, pulsing bulge.

Tall and dark, tattooed and DA-ed, in grease-stained denims, a body half tumbled, half threw himself in my path, his hands on my shoulders to break his fake fall as his mouth opened wide to suck on my tit. My head twisted round to where I’d left Buddy, and that might have been his head I saw tipping backwards, as a slender beehived shape knelt at his feet. Good luck to her, I giggled, if he has any strength left. And I dropped to my knees as well, tearing at the trousers that were thrusting out at eye level.

I still wanted that drink. 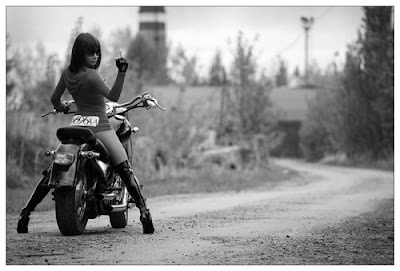 Posted by Jenny Swallows at 9:24 AM