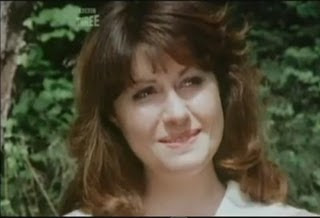 Like most American Doctor Who fans, I got my start thanks to PBS airing (and airing and airing) the mid-late 1970s Tom Baker series, best remembered by most people for the monster scarf and the talking tin dog, but by me for the presence of Sarah Jane Smith - actress Elisabeth Sladen.

A feisty, almost tomboy-ish brunette who completely overturned the stereotype of television beauty at a time (early 1990s) when most women in TV were apparently auditioning for 90210, she also struck me as the kind of woman I would want to be if I could; strong enough to stand up to whatever threat was thrown at her, be it human, alien or asshole, but sweet enough to win those same adversaries' hearts. Watch Genesis Of The Daleks, one of the myriad 1970s adventures that are now available on DVD, and then "The Stolen Earth" from thirty years later. Even Davros, the chairbound wrinkly who wants to conquer the universe, is clearly in love with her.

Certainly she never let the Doctor walk over her, no matter how often he tried to, and when a new companion, Harry, started sniffing round the Tardis, with one eye definitely set on winning Sarah Jane's heart, she dismissed him with a disdain that was all the more withering for being unspoken. There was never any suggestion that Sarah Jane was gay... rather, like the character she is most clearly based on, Diana Brackley, the scientist heroine of John Wyndham's The Trouble With Lichen, she is portrayed as being simply far too busy to bother with romance. But a girl could dream....

Sarah Jane (and Elisabeth) left the Doctor in 1976, but thirty years later returned for a one-off appearance (School Reunion) that was so well-received that she was promptly gifted with her own show, the Sarah Jane Adventures... incredibly, the first Doctor Who spin-off series in the program's almost-fifty year history. Sightings of it have been sporadic on US TV, but the DVDs are available and excellent.

And now Elisabeth Sladen is dead, the second "major" Who-related death this year (the Brigadier fired his final round on February 22), taken by the cancer that she hid from all but her closest friends and family for ... well, who knows how long? The new series of the main show launches on Saturday, and Sarah Jane was not scheduled to appear in any of the episodes. But everyone who grew up watching her... or wanting to be her... will feel her presence hanging over them anyway. 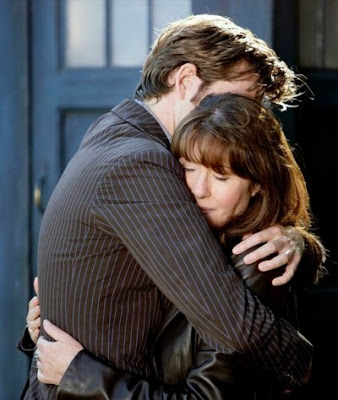 Posted by Jenny Swallows at 7:36 AM