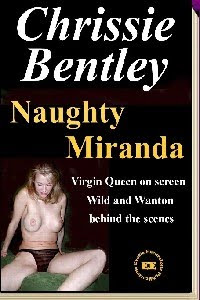 It is more than twenty years since Miranda Bradley first walked into our evening television viewing, the butter-wouldn’t-melt-in-her-mouth girl-next-door who captured our hearts in her first ever role, and has retained her hold on them ever since. Living a life without scandal or mishap, or any of the behind-the-scenes shockers that habitually shake the image of her small-screen contemporaries, Bradley was long ago dubbed the Virgin Queen by the tabloids. But the time has come to puree that purity – and who better to flick the switch than Bradley herself? In other words, butter still wouldn’t melt in her mouth. But her men always do.

EXCERPT
You only had to look at Madeleine to know she was man-eater, in every sense of the word. She had one of those mouths that was simply made to swallow cock, and the kind of body that made every cock want to be swallowed. Just walking down the road with her, as I sometimes did after book club, every guy on the street would turn to look at her, while she kept up a running commentary, just loud enough for me to hear, on why she would, or wouldn’t, go home with each of them.

“I used to practice on bananas.”

She paused. “Really, before I ever had a guy, I used to practice on bananas. I’d peel ‘em back and see how far down my throat I could stick one. The first wet dream I ever had, I was blowing the guy next door, and when I did start dating, I almost went mad waiting for him to make the first move, just so I could get him in my mouth.

“None of the other stuff interested me. I didn’t care about losing my virginity, or having my tits felt, or my pussy licked. I just wanted to suck a cock and it was ridiculous, because you’d think every guy in the world would have been queuing up at my door, but I went through four boyfriends before I even got my hands down somebody’s trousers. And when it did finally look like happening, the idiot got so excited so quickly, he’d come all my hand before I’d even got his pants down.

“Anyway, one night I was babysitting for a family down the road. They just wanted me to stay until their older kids got home. They’d gone to a party or something, there was a boy who was about a year older than me, and his sister who was a couple of years younger. And the boy offered to walk me home. He didn’t know I only lived about five doors away, so I took him in the opposite direction entirely, and we wound up on the baseball diamond, it was pitch black, and we just started fooling around. Not kissing or anything, more like wrestling. He’d grabbed my wrap and started running off with it, and I caught him, and we were on the ground, he was sitting on my chest, pinning me down, and I was trying to get him off me, by tickling his ribs.

“He was squirming, and pushing forward, his crotch was right in my face, and that was when I noticed he was H-A-R-D., hard. Now, I should mention it was early summer, and really warm, so all he had on down there was a pair of shorts, so this was a real tent-pole sticking out, and I thought, ‘well, it’s halfway there anyway,’ so I just popped it out of his shorts, opened my mouth and in he went.

“It was nothing like I’d expected. A lot bigger, for a start. Fatter. I’d never found a banana that thick, so that surprised me. And it tasted different as well. I’d never really thought about what a cock would taste like, I just assumed it would be a lot like any other part of the body, your arm or something, so that surprised me as well, although not as much as I surprised him. I think it took him a moment or two to realize precisely what was happening, but suddenly he was ‘what are you doing?’

“Now, you all know it’s impossible to speak with something that big in your mouth, so I just made a muffled mmpphh-mmpphhh sort of sound, and held on a little tighter in case he tried to pull away – which he did, because I think he was getting a little scared now, in case I bit it off, maybe, or I didn’t know what I was doing and might freak out when I found out.

“So I let go and said, ‘what do you think I’m doing? If you’re going to go round sticking things like that in people’s faces, what do you expect to happen?’ That completely threw him, so while he was thinking about it, I just reached up and popped him back in my mouth.

“The problem was, he was so big I couldn’t do anything once it was in there. I couldn’t suck, I could barely move my tongue, I just lay there with him sticking in there. So I took hold of his hips and started swaying him back and forth, until I could feel him sliding in and out. And, of course, he figured that out very quickly. He leaned forward, with his hands on the ground, and started fucking my mouth.

“He was so gentle about it, and as my muscles began to relax, I found I could do all sorts of little tricks, little sucks and nips, and he was moving faster and faster, and it was so smooth, my eyes were closed and this really was the best thing I’d ever felt in my entire life, the happiest I’d ever been, just lying there with him moving in and out of me. My lips were tracing the little bumps and veins on his prick, and the ridge, and the smooth curve, it was everything I’d ever dreamed it could be and more.

“I didn’t ever want it to end, even when my mouth started aching, but of course it had to. He was thrusting harder and harder, until suddenly he jerked himself out and, in the same instant, I felt his come whip across my cheeks and my lips, which was great because that’s the one thing I’d never actually figured out how to handle. I know now, of course, but back then, I really wasn’t sure, I figured I’d just deal with it when it came. If you’ll pardon the pun.

“I licked a little off my lips, and I wasn’t sure about the taste, so I wiped the rest off with my hand, and smeared it on the grass, while he just collapsed in a heap beside me, panting. It was so funny, he was completely exhausted, and it was ages before he even opened his eyes again, let alone said anything.”

“So what did he say?” Laura asked.

“I really can’t remember,” Madeleine replied. “I was too busy wondering how long it would take him to get it up again.” 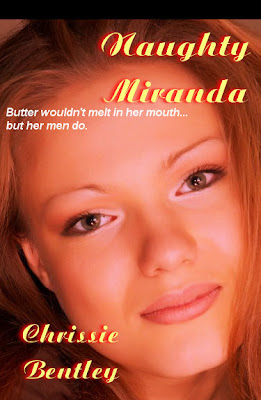 “Butter wouldn’t melt in her mouth,” insists the book’s jacket, “but her men do,” and that should serve as ample description of Miranda’s sexual forte, as it plays out in exquisite (but never repetitive) fashion again and again. Whether hitch-hiking home after a disastrous vacation, playing Scrabble with her scriptwriter, or even attending her local book club, Naughty Miranda locates the sexual possibilities in every situation, then explores them in vivacious detail. Bentley writes from the hip, and pulls no punches. There is no fluffy romance to confuse Miranda’s motives, and no flowery analogies to disguise her intentions. She is just a girl who enjoys sex, and out of her enjoyment emerges one of the most deliciously explicit novels of the year so far.
Posted by Jenny Swallows at 5:28 AM